TRUST IT NO MATTER HOW &#*%ING HARD IT GETS

Chapter 7. Sounds innocuous enough, doesn’t it? Chapter 7. Somewhere close to midway or so, perhaps? It’s a chapter, simple. Nope. Chapter 7 of my current work in progress is where everything fell into a dark hole.

Into the Forsaken Forest is the first in a series of four or five books (depending on how things work out). The series will detail the adventures of a teenage girl, Mari, who is magically transported from earth to a place called Azzur on multiple occasions. I’ve been pantsing it with notes but no outline. I did, however, have a plan of sorts—thirty chapters, 60+K words. 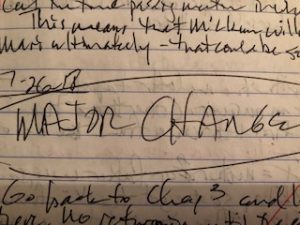 I reached the first draft of chapter 20 near the end of July 2018 and hit a wall. I’d just brought Mari back to Azzur on her third trip and realized there was simply too much jumping back and forth for a mere 60+K words. Too much traffic between here and there. Here’s what I wrote at the top of my notes that day. → → → →

I backed up, all the way to chapter 3, and canceled Mari’s initial leave-taking from Azzur. I made her stay. This required mooshing things together. I took chapters apart and put them back together again, using the useful and discarding the rest. And when I arrived at the original chapter 12, which had been reduced to chapter 7, I decided to get the chapter breaks back in line to the original draft so I wouldn’t have to do quite so much work on transitions from that point on. But chapter 7 ended up being way too long. (Not unlike this paragraph. Sorry.)

This week, the official rewrite of the first draft with the above changes brought me back to chapter 7 (née 12). As I worked on it, I felt like I was riding a bicycle on a cobblestone road. The damn thing was bumpy, no flow at all. There’s a significant conversation in this chapter, and it had to roll, not jostle.

I’d also pulled the last 300 or so words from the chapter and repositioned them at the top of chapter 8 in order to shorten 7. But on reading the chapter aloud, I realized it simply wasn’t working without the original neat cut-off. So I edited some words out and returned the original ending to where it had begun.

If you’re still following me here, thank you. I will continue.

I took chapter 7 into my writing workshop this week, thinking they’d rip it apart and give me guidance on how to turn this bumpy thoroughfare into something workable. They didn’t. They praised it, said the conversation was great, that it gave the reader a break from the previous action while not feeling like an info dump. The chapter read smooth and worked for them. (And trust me, they would have told me if it hadn’t.)

So next week I take in chapter 8. Let’s see what they think of that one.