With the release of Star Wars: The Rise of Skywalker (which I have not yet seen), I thought it appropriate to repost this review from 2017. 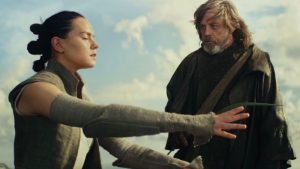 So, here’s what I thought of The Last Jedi. I didn’t love it. I haven’t quite figured out why because I think it will end up #2 on my Star Wars favorite list, but there you have it. I started crying when Luke kissed Leia on the forehead and didn’t stop until after I got in my car. It still makes me cry because my Star Wars is over. If Carrie Fisher hadn’t died, she would have been left for episode IX, but we know they’re going to have to off General Organa somehow. Sigh.

Kudos to Rian Johnson for finally getting the whole balance-in-the-Force thing right. The prophecy of “The Chosen One” always bugged the crap out of me. “The Chosen One will destroy the Sith and bring balance to the Force.” That’s like saying the Chosen One will kick the kid on the left side of the teeter-totter off and bring balance to the teeter-totter. Or let’s keep the sun shining 24 hours a day. We need the dark. We need to recognize the darkness deep within is if we are to remain whole. If the prophecy had said, “The Chosen One will destroy the Sith and save the universe,” I wouldn’t have an issue with it. But it says “balance,” and you can’t have balance on a scale when only one side carries any weight.

Adam Driver was brilliant. That first scene with Snoke (the scene without Rey) where Snoke smacks him around verbally and tells him he’s still a child and then the closeup on Driver’s face where he looks like a child with that pout—great. Daisy Ridley—doggedly carrying on the seeker’s role and doing it well. Carrie Fisher—I wish we’d had more. But Luke, beloved Luke, ripped apart and desiring nothing save dying on that island to put the Jedi to rest for good. I love the conflicted ones, and he was undeniably and beautifully conflicted.

I want to see it again and again. There’s so much going on, I suspect it will take several viewings to catch it all.

I cried as I first watched Pirates of the Caribbean: At World’s End in the theater. Why, you ask? Let me tell you. Forget Jack Sparrow (a stellar performance from Johnny Depp). Forget Will Turner (Orlando Bloom in all his matinee-idol glory). Because the story, contrary to popular belief, is about neither of them. No, the tale recounted in the first three movies of this franchise begins and ends with Elizabeth Swann (Keira Knightly in dazzling form).

Remember the lilting voice of a child singing the pirate song at the beginning of The Curse of the Black Pearl? That’s Elizabeth Swann singing her heart out as she and her father sail to the Caribbean. Mother gone, father all that’s left, and she dreams of being a pirate.

The plot twists and turns around a myriad of obstacles and self-serving characters, but watch the movies and you’ll see it. We wander off with an often seemingly lost Jack Sparrow. We follow the perils of Will Turner as he attempts to save both Elizabeth and his own father from doom and destruction. But it is Elizabeth who rises above it all, who, as she matures, gains confidence and the ability to save her own self, thank you. And when we get to At World’s End, she has blossomed into the character most instrumental in determining the course of the conclusion of the story.

I mean, think about it. The battle on the Pearl with Will and Elizabeth almost single-handedly taking on the attackers from the Flying Dutchman, while Captain Barbossa marries the two of them? A girl sword fighting? While sparring verbally with the love of her life? And then marrying him while they’re still fighting the villainous hordes? For this fan of strong roles for women in story-telling and female heroes who aren’t afraid to get dirty, it was heaven. But that wasn’t where I cried. That moment came a little earlier in the movie.

The Brethren Court of the pirates had spoken and named Elizabeth the new King of the Pirates. (I value the screenwriters’ choice of keeping it the “King” even though the new King was not male, but I digress.) As King, Elizabeth leads the pirate lords and their ships into the ultimate battle with Davy Jones and the East India Company. As they face their foe and realize they are massively outgunned and out-shipped, spirits drop.

And then…Elizabeth takes a deep breath, jumps up on the railing and rallies the troops in a speech reminiscent of Shakespeare’s Henry V’s “Once more unto the breach, dear friends….” This young woman—whom some might call a “slip of a girl”—stands up there proud and defiant and smacks these big, strong men around verbally and drags them into fighting mode. I cried.

I literally cried in that theater. Whether consciously or not, the story-by and written-by guys had created the first TRUE female hero to rise to the surface in mainstream popular culture. I know there are many strong women holding their own in movies and books these days, but here’s the thing. Elizabeth Swann seized the mantle of leadership like a man while still maintaining her womanhood, and she did it under the near-impossible odds of a major motion picture with Johnny Depp at the helm of the performance vessel and Orlando Bloom as her love interest. At that moment in time, all eyes were on her, including Johnny’s and Orlando’s, and everyone in the audience knew it. She had commandeered a movie of testosterone-driven derring-do and made it her own.

All hail Elizabeth Swann, the King of the Pirates!